I doubt it tho -- it had such a minor role and it's such a minor addition, they wouldn't bother with any original lineart.

If we knew where the missile pods were from, and I could find some good lineart of them, I could probably shop them on, but if not, I'd say it works fine.

So. Nobel Gundam with a purple ponytail.

If you feel like we shouldn't use it, I wouldn't mind. Getting it finished wasn't too great of an endeavor or anything.

Of course, Keiko's Rising was much more straightforward by comparison.
http://i59.photobucket.com/albums/g298/ ... f9cc5c.jpg

Little late with the episode 5 updates. And it's totally not because I completely forgot about them for several days or anything like that. >.>

Anyway, on with the show!

I get the sense that someone on the staff really likes green Zaku F2000s, because this is the second time I've had to recolor one to a green color scheme.

"You can learn all the math in the 'verse, but take a boat in the air you don't love, she'll shake you off just as sure as the turn of the worlds. Love keeps her in the air when she ought to fall down. Tells you she's hurting before she keens. Makes her a home."
Top

Thanks again, as always. As you might've seen in the preview, next week features a custom color Victory Gundam using the Impulse's Sword silhouette pack. If it's not possible to create lineart for that, let me know now and I'll just use a screenshot.
Top

It seems like a simple enough modification, so I'll probably be able to pull it off.

I'm more curious than anything, however, as to how the scaling between the Victory and a backpack designed for a Gundam somewhat larger than it is supposed to work. Might have to wait until next week to get a proper idea of it, but I'll make a few preparations in the mean time.

Status update: I've been working on the Sword Victory, but unfortunately the results have been less than satisfactory. I'll keep playing around with it, but in all likelihood you'll have to settle for a screencap, as you suspected. Sorry about that. 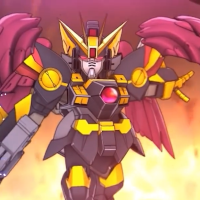 I can try doing it, if there's decent sized lineart of the Sword Impulse to work with.
Sakuya: "Whatever. Stop lying and give up your schemes, now."
Yukari: (Which lies and schemes are she talking about? It's hard to keep track of them all...)
-Touhou 07.5 ~ Immaterial and Missing Power
Top

Back with episode 10 artworks.

Question, do you think we can get Bearguy II lineart by removing Petitguy and chair striker?
My girlfriend was a loli.
Top

Probably, but since the Beargguy II didn't actually show up in the episode, I don't think there's any need for it.

Precisely. I see no need for there to be a stock Beargguy II.
Top

- One feature show during its battle against Takeshi's RX-78-2 is ability to eject outer armor and increase speed.
- In term of weapons, the pre-upgrade Nu Gundam Vrabe never use Mercury Lev, but Yuuki breifly mention how his experience of using fin funnels was horrible. Should that add to optional armaments?
- The Mercury Lev, which used by both upgraded versions, come in two pieces. Gun unit, which mount gatling gun, rocket launcher, shotgun, and railgun. And sword unit, which mount rapier, beam saber, sword, army knife, blade, and saw. As mentioned above, when Yuuki upgrade it to Nu Gundam Vrabe, he attach long sword to gun unit's railgun.

GAT-X105 Strike Gundam+. This is the gunpla used by Kaira Koshina before she get the Comamnd Astray. It also look identical to final version of Strike Gundam that Toru use in his last battle against Yuuki in summer arc.

- Although Toru built it, an episode before Kaira's battle against Yuuki show Meijin the 2nd work on it as well.
- The Mercury Lev sword unit has lance atatched to beam saber and capable to used as beam shield.
- Although not show in image, it's equipped with Aile Striker during the battle against Yuuki. Also during that battle, Kaira salvage Nu Gundam Vrabe+'s long sword (but I guess this doesn't count).

(I know I should post this before the last update, sorry)
My girlfriend was a loli.
Top

Guess this going to cause minor dilemma to Chris XD .

Now I know we only do SD that appear in GBF and only give cameo gunpla brief info. But we don't have page for Command Gundam in SD Gundam and since Aila's Command Gundam is striaght-build gunpla, I think it's safe to assume that it should feature the same arsenal.

Likely the time for new section.

Here is teh page for Hobby Hobby Imaging Builders. Since it's on GBF Official Site, I guess we can count it as Variation Series Based on Animation Production Designs. That being said, good number of them are actually debuted elsewhere, including the anime themselves.

NYA+MBKF-P02 Nyaia Astray
Mobile Animal mode (no, it really called that, guess someone among the staff really like Kuramochi's fan works)
My girlfriend was a loli.
Top
Post Reply
73 posts

Return to “Feedback and Contributions”